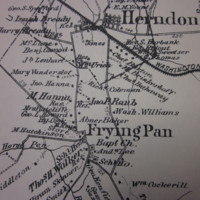 Map showing Dranesville, Herndon, and Frying Pan in 1862.  A Hutchison and a Cockerille were wealthy enough to have their name put on the map. 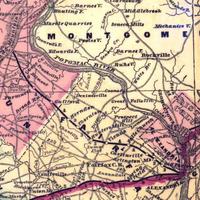 Map of the Fairfax area in 1862 showing the railroad that used to run through Herndon. 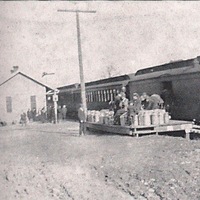 In the late 1800s/early 1900s there were many dairy farms in the Dranesville/Herndon area.  The farmers would bring their milk to downtown Herndon on horse drawn carts to be loaded into train cars at the Herndon Train Station.  The milk would be shipped directly into Washington D.C. making milk the main export of the town.  The train station was shut down in the 1950s and turned into a local history museum (The Herndon Depot).  Until the close of the train station and the onset of development, most inhabitants of the area owned and worked on private, family farms.  There was a handful of carpenters, merchants, and other tradesmen that ran the small town of Herndon.

Farming technology began to develop in the early 1900s that would make farm life easier and more productive.  It's hard to believe that as late as 1925 farmers were still skeptical of such devices and the expensive equipment was still a rarity on farms in this area.

Children were indispensable to the farming community.  Infant mortality rates were still relatively high and it was not uncommon for women to spend the majority of their young adult lives consistently pregnant.  Even with miscarriages and stillbirths, families were large out of necessity.  It was more cost effective to have lots of children to help on the farm than to pay laborers.

There has been no confirmed reasoning behind naming the area "Frying Pan" but one local citizen has an idea.  There used to be a mine across the street from where the church is located.  A frying pan was found at the old mine left by coal miners and locals decided it would be a good name for the area just south of Dranesville and Herndon.  Year later the town decided to abandon the Frying Pan name for a more sophisticated "Floris."

The Floris School was built in 1869 and taught whites and blacks.  Similar to Frying Pan Church this was practically unheard of in this time period.  A local citizen remembers that tuition was $1 per child per month.